When it comes to condenser mics, the Samson C01 has proved time and time again that it’s a solid workhorse. It is a to-the-point piece of recording gear that does exactly what it claims to. It is quite an old-timer, but when it comes to affordability and versatility, it provides more than satisfactory results. The Samson C01 is an excellent entry-level condenser mic.

The Samson C01 is a large diaphragm microphone that does a terrific job at versatile recording. It might not be the most powerful product of its type, but it bridges the gap between entry- and pro-level condenser microphones. First released back in 2002, it is amazing how well this product holds up on the market compared to its more modern peers. 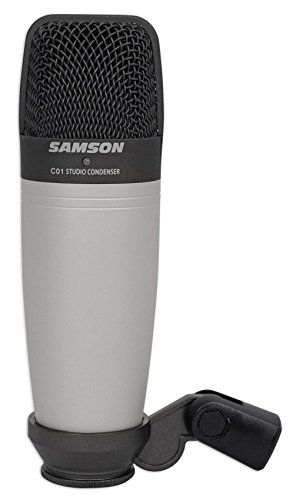 This is primarily a mic for studio use. Whether you’re a self-recording vocalist, an acoustic guitarist, or a drummer, you’ll benefit hugely from the C01. It holds up particularly well for drum overheads, so it is a useful component that can work fantastically in an acoustic band environment, seeing as you can apply it to a variety of recordings.

As a producer/recorder, you could use this affordable mic in many different instances. It is also perfect for singers who move a lot.

The Samson C01 is clearly aimed at beginners, but pros won’t be disappointed with it either. It is easy to use and extremely cheap. If you are a heavy metal band or a recording artist who uses a lot of distortion and harsh vocals, however, then the Samson C01 isn’t really the best deal for you (although it may perform decently).

That is, unless the music that you make has clean, more tender vocals, in addition to the heavy parts.

When you purchase the Samson C01, it comes packaged in a hard-shell case, which is of tremendous importance when it comes to studio gear. If you are somebody who travels a lot, you’re going to need a hardcase. Additionally, the hard-shell case has a cool handle and is very easy to properly secure, which is a huge plus for this mic.

First of all, the Samson C01 feels like a Samson product, which is an excellent thing. Now, some might disagree with the way it is marketed as a large diaphragm condenser mic, but at 19mm, the diaphragm is definitely large. It boasts a high fidelity and great response, and there are no brittle and shrill highs like with many of its peers.

The sensitivity of the Samson C01 is around 33dB/Pa, which is a great thing for condenser mics. With the maximum SPL being able to tackle up to 136dB, it can really take a punch.

When it comes to the tone, it is open, bright, airy at the top, and less solid at the low end. The C01 is connected to the power source using a 48v phantom power connector and once it is plugged in, a LED light will turn on. Although a USB-only version does exist, this one is connected via a gold-plated XLR connector.

The Samson C01 is plugged directly into your audio interface and connected to the power source via the 48v phantom power connector. Once everything is set up properly, try using your preferred DAW for some test recording. And that’s it — you’re all set up.

While it’s a fantastic product, the Samson C01 clearly has some downsides. If you really need a shock mount, the MXL 990 comes with one included at roughly the same price as the C01. If you’re looking for a similar microphone that features a USB connection, you’re in luck, because the very similar Samson C01u Pro is USB-compatible with both PC and Mac.

The C01 won’t let you down unless you can’t put it to use without a USB connection. It is very affordable and delivers awesome results for a very small price. It is a fantastic beginner mic, both price- and quality-wise. The Samson C01 may not be the best large diaphragm condenser mic out there, but it definitely does what it is supposed to extremely well.

Post Views: 326
We hope you love our reviews! For your information, we do earn money from commission in the link in the content! For more information click here!
ShareTweetShare