When it comes to versatility, there aren’t too many microphones that are as well-rounded as the Yeti from Blue. The Blackout edition is definitely the sleekest-looking one. Simple to use and sporting quality build, the Blue Yeti Blackout microphone is the most popular release.

It is suitable for home and studio production, podcasts, voiceovers, and a variety of other recording needs and requirements. Read on to see why the Blue Yeti Blackout is one of the most popular USB mics out there.

Released back in 2009, the Blue Yeti has been used by countless musicians, YouTubers, game streamers, and podcasters from all over the world. It is considered the No. 1 USB microphone and was recently released in a Blackout Edition upgrade.

Blue’s mission with the Yeti Blackout was to create a versatile condenser microphone that is easy to use and brings quality tone to the table. 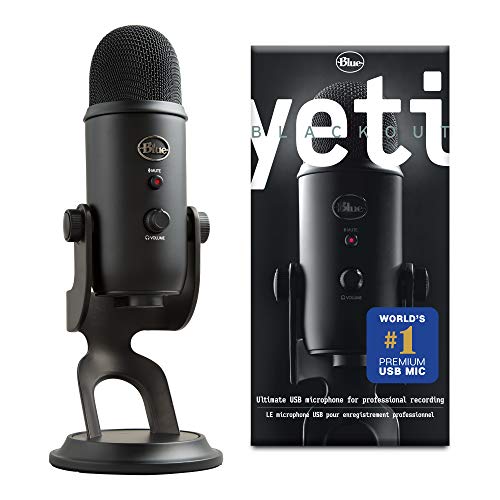 Who is the product for?

Although it is great for vocal and instrument recording, the Yeti is primarily aimed at the YouTube and podcast crowd. With its simple, easy-to-use USB connectivity, you don’t need anything but a laptop and the Yeti Blackout to record, not even drivers. This is incredibly convenient for creating quality-sounding content on the go, wherever you are, which is why this is a perfect unit for podcasters, YouTubers, and other content creators.

The Yeti’s box comes with simple diagrams that explain its functions. This means that the creators clearly aimed at the less recording-savvy crowd. This was done in order to boost the user-friendliness of the unit, as well as to inspire confidence among the new users who simply want to create content. That being said, if you like tinkering with mixer settings, this product may not be for you. Its target crowd consists primarily of those who want to create quality content without much effort.

Pricewise, it certainly isn’t the cheapest entry-level mic out there. However, it is well worth the cost.

The packaging is pretty basic, but don’t hold this against the Yeti, because the product itself is very basic too. This was done intentionally, for people who just want a microphone that they can plug in directly into their computer and start recording. Inside the box, you’ll find a standard USB cable, an easy-to-understand user manual, and the mic unit itself.

There is no need for extra stuff, as this condenser mic knows what it is and is very proud of it. Keep in mind, however, that this is one pretty large microphone.

First of all, as you probably are already aware, this is a plug and play type of a mic, compatible with both PC and Mac. Its frequency range is 20Hz-20kHz, which is pretty impressive for a mic aimed mostly at YouTubers and podcasters. The Yeti’s max SPL is 120dB, meaning that it can take a punch, loudness-wise. It has stereo, bidirectional, omnidirectional, and cardioid polar patterns.

Weighing around 2.2 lbs. with the stand, it isn’t the lightest of microphones, but that does mean that it boasts a quality build. Having a 3.5mm port is essential for monitoring your recordings. On the Yeti, it is located on the underside. There are 3 dials on the microphone itself.

The headphone volume knob works essentially as the output volume control, meaning that turning the knob in either direction won’t have any effect on your recordings

The gain knob controls your mic’s sensitivity. If the headphone volume knob was the output control, the gain knob would be the input volume knob on the device. This will affect your recording.

The Blue Yeti was made with user-friendliness in mind, meaning that the setup is as easy as plugging the USB cable into your PC/Mac and into the mic. No drivers are needed, so you can start recording right away. Note that you’re going to have to use audio recording software for recording. Try Audacity, for instance.

You can mount and dismount the Yeti onto and from the stand, which is very useful, as you won’t need a boom arm to get things going. However, the stand doesn’t really put it in an ideal position, so you might want to resort to putting a box or a few books under it to get it in the right position. Despite this minuscule downside, the fact that it comes with a stand is pretty amazing, really, as most mics don’t. If you don’t like the stand, you can attach the Yeti to any boom arm or mic stand.

If you are looking for an entry-level mic for music recording and/or podcasting/YouTubing that comes at cheaper prices than the Yeti, then the Samson C01 might be your best bet. In the unlikely case that the short stand presents that much of an issue for you, there are other similarly priced mics out there that come with both a boom stand and a shock mount, but you usually don’t get USB access and simplicity that the Yeti Blackout provides.

If you’re looking for a simple, USB-powered condenser microphone that provides excellent recording sound and requires little-to-no setup, the Blue Yeti Blackout is a perfect mic for you. The Blackout Edition has turned the regular version into something that boasts a sleek, modern look.

Although the price is on the medium-to-high side, for the money, you’d be hard-pressed to find a better mic that requires you to have nothing but a laptop or Mac.

Are Condenser Mics Good for Vocals?

Seven Hot Headphones for the Studio 2021

Post Views: 538
We hope you love our reviews! For your information, we do earn money from commission in the link in the content! For more information click here!
ShareTweetShare

How Do Air Purifiers Work and Clean the Air at Home?