First renders of the Samsung Galaxy Tab S8 were leaked by a Zouton exclusive news report. Samsung is expected to roll out the S8 at the beginning of 2022. The tablet reportedly packs several new features and upgrades.

The new S8 renders suggest that the tech giant hasn't changed much in terms of design. The S8 looks similar to its older sibling the Samsung Galaxy S7. There is a long and lean grey patch behind the tablet which might hold the stylus that comes with every tablet model of Samsung. 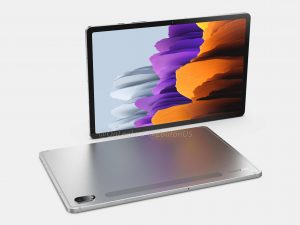 "As per the initial reveal of the specs, Samsung Galaxy Tab S8 will feature thick bezels on all sides that will probably bring down the screen body ratio to 82 percent. This premium tablet by Samsung comes powered by an octa-core Snapdragon 888 chipset with 8GB RAM and 128 Gb storage which can be further expanded up to a whopping 1TB. The chipset features an Adreno 660 GPU for graphics processing and rendering of high-quality videos. The Samsung Galaxy Tab S8 gets a dual rear camera of 13MP and 5MP sensors, while on the front the tablet supports an 8MP camera," according to Zouton.

The release date of the new Samsung tablet is not official yet, however, reports suggest that it can be expected in the early months of 2022. The Samsung Galaxy S7 and  S7 Plus were launched in August 2021. The tech giant might release the S8 at a later date owing to the global chip shortage.