A recording interface can significantly boost the quality of your recorded material. Even the most affordable two-channel models out there can record in professional audio CD quality. This means 16-bit depth and 44.1kHz resolution. What’s more, most affordable models can routinely reach a 48kHz resolution.

That being said, an audio interface is a great solution for when you need to boost the sound coming out of your computer. For example, if you want a better sound on your speakers or studio monitors, you can use an audio interface to boost it. Let’s see what you can do with the Peavey USB-P.

The USB-P from Peavey is a compact-sized and very sturdy audio interface. It was primarily made for on-stage use, hence the heavy-duty metal chassis. This is also one of the most affordable interfaces Peavey makes, as well as one of the simplest.

Instead of recording, this little device is made for playback, the letter P in its name standing for ‘Playback.’ The USB-P is one of the most popular options among musicians who want to boost the quality of the signal coming from their computers on stage. 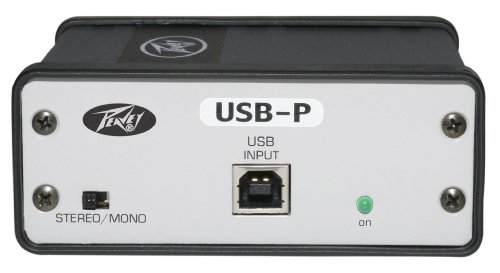 As stated above, the main purpose of this little interface is to be used in live settings to boost the signal coming from the computer. It has two XLR outputs that you can connect with XLR cables to the venue’s PA system or the mixer.

Not so surprisingly, this little fellow is very popular with church bands and choirs. It is also popular among ministers and other people giving speeches in churches and other places of worship.

Since it doesn’t have any instrument or XLR inputs, you can’t really use it for recording in a home studio. Also, it lacks a USB output through which you would be able to connect it to a computer as the standard recording oriented audio interface.

Also, it is a great and affordable option for DJs and public presenters.

The package this interface comes in is very basic. It contains only the device and some basic documentation. It is packed in a minimal plastic packaging. You won’t get the USB cable that’s needed to connect it to the computer. Likewise, you won’t get the XLR cables you’ll need to connect the USB-P to a mixer or the PA system.

Peavey also doesn’t offer any free DAWs, plugins, or virtual instruments, a thing that’s very common in recording oriented interfaces. However, you can download the specs sheet and the user manual from the manufacturer’s official website.

The USB-P is a USB-run and USB-powered device, meaning it feeds off the computer it’s connected to. It doesn’t have the standard AC power receptacle or adapter. Since it is a standard USB device, you can pair it with both Windows and Mac computers.

This interface is a plug and play device, meaning that you just need to hook it up and the computer should automatically recognize it. Also, you will have to control it through the computer, as there are no onboard controls other than the stereo/mono switch on the front panel.

That being said, this device is capable of delivering professional-quality sound – 16-bit depth and 48kHz resolution.

The front panel of the device is equipped with a single USB input port, stereo/mono slider switch, and the power status LED. On the opposite side, the back panel has a pair of 3-pin XLR output jacks. They are balanced Low Z jacks. The outputs are lifted off the ground.

Have in mind that this device doesn’t have onboard phantom power and that you will need a separate microphone amplifier if there are microphones in your rig.

To get the most out of this neat little device, you should place it between your computer and the venue’s PA or mixer when performing live. To connect it to a computer, you’ll need a USB cable, and to connect it to the mixer or PA, you will need a pair of XLR cables.

You should use the installed software on your computer to control the device. It can push out sound in 16-bit depth and 48kHz resolution, which is more than enough for a live gig, church performance, or a dance club.

Here’s a list of the best and the worst features of this compact audio interface.

You can’t record with it

In case you’re looking to expand both your on-stage and recording rigs, but you’re working on a budget, you might want to check out the IK Multimedia iRig Stomp I/O. This guitar processor/audio interface combo device can deliver serious recording quality – 24-bit depth and 96kHz resolution. It has both mic and instrument inputs, as well as the built-in phantom power. The guitar processor side works best in combination with the iPad and IK Multimedia software.

If, on the other hand, you want a traditional audio interface for recording audio, you might want to take a look at the Focusrite Scarlett 2i2 2nd Gen. This affordable audio interface delivers excellent recording quality – 24-bit depth and 192kHz resolution (sample size). It is a sturdy interface with two combo XLR and 1/4” instrument input channels.

Computers nowadays have rather poor sound cards, and if you’re planning on doing more than playing games and listening to YT and SoundCloud clips, you should get an audio interface. When buying one, make sure it does what you need it to do. If you only need to boost the sound quality, the Peavey USB-P is an excellent choice. If you need something more, you might want to consider one of the alternatives.

Post Views: 141
We hope you love our reviews! For your information, we do earn money from commission in the link in the content! For more information click here!
ShareTweetShare