Stock sound cards that come with today’s computers are decent enough to reproduce video game and multimedia sounds. However, when it comes to recording even a simple podcast, the stock cards aren’t of much help.External sound cards, also known as audio interfaces, are there to boost the quality of the signal while you’re recording. Even the most affordable options such as Behringer U-Phoria UM2 ,can deliver audio CD quality.

Beginners recording at home should start off with a simple 2x2 or 4x4 device and build up from there. Let’s see what the affordable Behringer U-Phoria UM2 can do.

The Behringer U-Phoria UM2 is one of the most affordable USB audio interfaces in Behringer’s catalog. It is a ‘desktop’ class device with two input channels and two output channels. It also serves as the entry-level model of the UM series.

Since it was first released several years ago, there haven’t been any significant updates or changes. All-important specs and features have remained the same. Over time, the UM-2 has gained a reputation as one of the best options in the budget class. 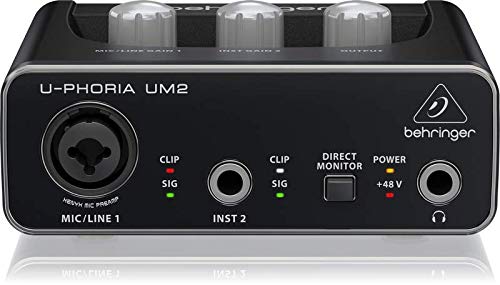 The U-Phoria UM2 is intended primarily for beginners and musicians looking for a low-cost audio interface that can deliver decent sound quality. Given the fact that it has only two input channels and one of them is a combo XLR/instrument jack, its primary function is recording simple acoustic songs that feature the guitar and the vocal.

Other than that, it is versatile enough to allow home studio owners to record their songs in a track-by-track manner. Have in mind that you’ll only be able to record guitars and basses and other instruments that utilize the standard 1/4” jacks.

Recording MIDI keyboards is off limits as there are no MIDI in and out ports. Also, you won’t be able to record live drums with this little unit due to the channel limitation. You will have to add keys and drums via software.

The Behringer U-Phoria UM2 is bundled with a large collection of software that’s available for free on Behringer’s site.

The star of the collection is Tracktion, Behringer’s own DAW solution. It is a simple and powerful program that has most of the features and options found in the leading DAWs. Other than that, the package also includes ASIO4ALL driver and a set of effects and instruments for both Mac and Windows systems.

Product documentation can also be downloaded from Behringer’s site. It is available in Japanese, Chinese, and English.

The front panel also features signal and clip LED indicators for each channel, a direct monitor on/off button, a mic preamp status LED, a 48V phantom power unit LED, and a standard 1/4” headphones out. The back panel is equipped with two RCA outputs (left and right), a USB port, and a phantom power on/off switch.

In terms of the sound quality, the Behringer U-Phoria UM2 can support 16-bit audio depth, while there are two resolution (sample rate) options – 44.1 kHz and 48 kHz. 96 kHz resolution remains firmly out of reach.

As far as compatibility, you can pair this audio interface with Windows and Mac computers. The oldest supported Windows system is XP. On the other side, OS X is the oldest supported version of Mac OS. It also works well with all the major DAWs on the market.

When you purchase the UM2, you should go to Behringer’s official site and download the programs and plugins that come with it. The most beneficial components of the software package are the Tracktion DAW and ASIO4ALL driver.

The latter is a free driver that significantly reduces latency on the computer side of your rig. You can install it on both Windows and Mac devices, and it affects all audio devices and programs on your machine. The driver was developed by Steinberg.

To take full advantage of the provided Tracktion software, you should also download the instruments and effects compatible with your OS.

Here is a brief summary of the highest and lowest points of this interface.

If you’re looking for something with more channels and versatility but don’t want to pay an arm and a leg, you might want to take a look at the Tascam US-4x4. This unit has four input channels, four output channels, and MIDI support. The interface records at 16-bit depth and 96 kHz resolution.

If you’re putting together a professional-level rig and money isn’t an issue, you might want to check out the Roland Studio-Capture. This beast offers 16 input channels, 10 output channels, comprehensive controls, MIDI support, 192 kHz maximum resolution, and the ability to work in unison with another Studio-Capture device.

Are you looking to make your first steps and record your first demos and podcasts? If so, a simple two-channel unit like the UM2 will more than suffice. You’ll get more than decent sound quality at a fraction of the price you’d pay for a recording session at a brick-and-mortar studio.

Do I Need an Audio Interface to Make Beats?

Post Views: 526
We hope you love our reviews! For your information, we do earn money from commission in the link in the content! For more information click here!
ShareTweetShare