Most condenser mics aim to provide versatility. The Sennheiser e901, on the other hand, is a condenser mic that is made with kick drums in mind.

Coming up with a satisfactory kick drum sound is always a problem. The kick drum is a component that needs to stand tall in the mix but still be apparent. If you are looking for a solution for finding a better kick drum sound, read on to find out why the e901 might be the right choice for you.

As mentioned, the Sennheiser e910 condenser mic is a microphone intended primarily for kick drum recording. It was released over a decade ago and has been successfully used by numerous producers since. The e901 is also a boundary microphone, but more on that later.

This mic brings a lot of experimentation to the table, which is to the preference of many audio engineers out there. It is definitely an interesting model that will have you experimenting until you’ve got the perfect sound from a kick drum for the mix. Rarely do you see a condenser mic with such a narrow purpose, which is fantastic for capturing the clearest possible kick drum sound. 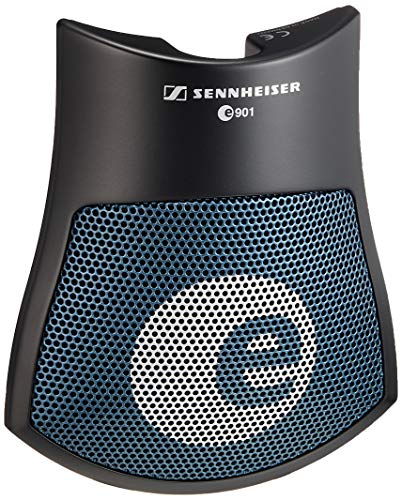 This microphone is a good choice for every sound engineer who records drums, meaning almost every sound engineer out there. Drummers often have opinions on kick microphones, mostly based on previous experience with audio engineers. However, the thing with mixing drums is that they have to sit in the mix perfectly. They may sound good on their own, but they still have to be matched with other instruments.

The Sennheiser e901 mic offers more recording tweak-ability and is a very useful tool in the hands of an experienced sound engineer. As such, it is aimed at professionals, and even though the price might be a bit high for a microphone, a true professional always loves to have a single-purpose mic.

When it comes to setting it up, it is much easier than the mics you may be used to dealing with. This one, for instance, doesn’t require a stand. It is typically laid on a pillow or a towel inside the kick drum. Adjusting the height is thus out of the equation, meaning that the e901 is much simpler to align than its peers.

Owing to its simplicity, the box doesn’t include a whole lot. There are no required stands or holders. All you get is a pouch and a user manual. However, even though it is basic and simple to set up and use, a hardshell case would be a welcome accessory here, especially given the price tag. Some cheaper condenser mics offer the hardshell case, but then again, some that are even more expensive than the Sennheiser e901 don’t, so this isn’t too much of a downside.

One of the main reasons for a price tag this high is the fact that the e901 comes with a preamp inside that changes the way you perceive kick drum microphones. It also offers a cardioid pickup pattern for a more direct yet not too narrow sound capturing. Owing to all of this, the Sennheiser e901 is capable of delivering highly precise and dry kick drum sound. Now, dryness is something that you really need when capturing kick drums regardless of the genre of music you’re recording.

These features also allow the e901 to deliver natural sound and fast transient response. As a result of coming with a preamp, it has proven itself particularly good and practical during live performances. This makes it stand out even more, as condenser mics aren’t typically intended for live performances.

As mentioned, this model from Sennheiser is all about the easy setup. There isn’t a whole lot you can do to change what you get out of it when it comes to its physical locations. However, you can try putting it on different surfaces. For example, putting it on a towel might give you a different sound than if you put it on a rubber cloth, owing to the difference in vibration between the two surfaces. This is where you need to experiment and find what fits your sound best.

If you’re looking for a similar but slightly less pricey kick drum microphone, the Shure BETA 52A is a good choice. It’s a supercardioid dynamic mic that will set you back a bit less, thus providing an even greater value for money. However, it does include a typical setup with a mic stand, and it is a dynamic microphone, so the signal will be far less clear than with the e901.

If you’re looking for dual mic, advanced-level product that includes a hardshell case with a similar price, try the CAD Audio Stage 7 Premium. It is a 7-piece drum pack that does almost as good a job as the e901. Despite this, it can never beat the Sennheiser’s setup simplicity and tone.

The Sennheiser e901 is one of the best drum kick microphones on the market. It delivers a fantastic sound and offers easy setup options with a lot of tweak-ability. Despite its seemingly hefty price, this model overdelivers and is thus worth every penny.

Top Legendary Drummers You Should Know About.

Post Views: 205
We hope you love our reviews! For your information, we do earn money from commission in the link in the content! For more information click here!
ShareTweetShare