Recording and performing gear can cost a small fortune, especially if you go the traditional route and opt for analog equipment. That means multiple trips to the music store and hours upon hours of testing and matching. However, if you decide to go digital, you can get a combo processor/audio interface for the fraction of the price you’d pay for separate performing and recording rigs. Such a device, like IK Multimedia iRig Stomp I/O,can replace your stomp boxes on stage and help you record in studio.

This device is one of the most expensive controllers in IK Multimedia’s catalog and is certainly the most versatile one. You can use it with Windows, Mac, and iOS devices, though it really shines when connected to an iPad loaded with IK Multimedia’s software. 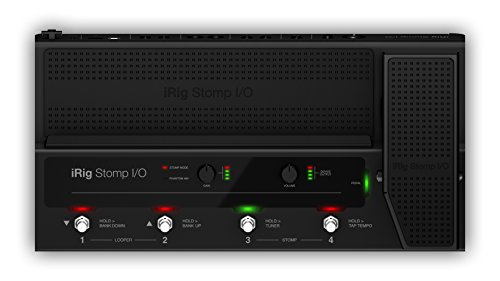 This mighty controller is intended for the brave and the bold, for musicians ready to embrace digital technology and simplify their performing and recording equipment sets.

The processor section of this device, when coupled with IK Multimedia programs such as VocaLive and AmpliTube, can replace all effects pedals and significantly simplify your onstage signal chain. You can use it as a standard floor processor day in and day out.

On the other hand, this versatile device is also a quality audio interface and a good companion in the home recording studio. With the help of the processor component, you can record already modeled and pre-processed sound.

There are two packages you get with this processor/audio interface. The first one is physical and the second one includes software. The physical package contains one iRig Stomp I/O unit, one USB-A to USB-B cable, one Lightning cable with Mini-DIN jack on one end, and a DC power adapter. A USB cable is there for Windows users, while the Lightning cable is there for Mac and iOS users.

On the processor side, the iRig Stomp I/O is equipped with a quartet of stomp switches and an expression pedal. It also has gain and volume control knobs. The stomp switches are there to control the virtual pedal and amp setups, as well as to enter and exit the tuner mode.

The expression pedal is set to control the Wah pedal by default, provided that one is included in the rig. If there’s no Wah pedal, you can assign it to control any other aspect of any pedal.

The audio interface side of this device contains one female XLR microphone input port, an onboard mic preamp with a 48V phantom preamp, one standard ¼” instrument input, MIDI in and out, and stereo line output with a pair of 1/4” TRS jacks.

In recording mode, the iRig Stomp I/O delivers 24-bit depth and 96 kHz resolution, being on par with some of the better audio interfaces on the market today.

To get the most out of this device, you can connect it to your recording rig and use it to track your songs.

When you connect the iRig Stomp to the recording computer, you can take advantage of the processor side of the device to model your sound right on the spot, thus simplifying the entire process. You can use the stomp switches to dial in the perfect setup and the expression pedal for the Wah.

To really squeeze everything out of this controller, you can attach a MIDI keyboard to it and record it like the rest of the tracks.

When playing live, you can use the bundled apps to maximize the device’s potential. If you’re playing bass or guitar, you can take advantage of AmpliTube and AmpliTube Acoustic. On the other hand, if you’re a vocalist, VocaLive is the app for you.

Here are the high and low points of this guitar processor/audio interface.

Takes a bit to learn all the nuts and bolts

In case you’re looking for a straight-up USB audio interface that can cover the same ground as iRig Stomp I/O, you might want to take a look at the PreSonus AudioBox USB 2x2. Make sure to get the new version, as it can record in 96 kHz resolution. Other than that, it has a quality mic preamp, two combo XLR input channels, and MIDI support.

If you need some serious firepower and are aiming at semi-pro and/or professional recording quality, the Roland Studio-Capture might be your best choice. This interface has 16 input channels, 10 output channels, MIDI support, advanced control options, and unparalleled compatibility.

Buying separate gigging and recording rigs can consume a lot of your time and money. So if you’re looking to cut costs and save time searching, yet get a device that can perform well on both fronts, you should definitely check out the iRig Stomp I/O by IK Multimedia.

Post Views: 332
We hope you love our reviews! For your information, we do earn money from commission in the link in the content! For more information click here!
ShareTweetShare