"Built from the ground up to enable the most immersive gaming audio experience possible, the Razer Kraken V3 Family lineup marks an overhaul to the fan-favorite Kraken by retaining proven headset fundamentals and implementing Razer HyperSense to deliver a lifelike experience with more features," said Razer. 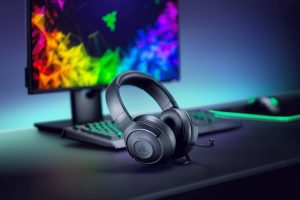 Razer Kraken V3 Pro was introduced at RazerCon 2021 as the first wireless headset from the Kraken lineup. The V3 Pro is the most notable headset. It costs $199.99 and will be officially launched in Q4 2021. The device is packed with proprietary TriForce Titanium 50mm drivers to create immersive sound effects. The THX Spatial Audio allows users to make use of the surround sound option along with better audio customization features.

This headset is fitted with Razer HyperSense tech. According to Razer, "Razer HyperSense is an intelligent haptic technology that delivers rich, lifelike touch sensory feedback based on audio cues. It allows gamers to feel the action in their favorite games by utilizing advanced haptic drivers within the earcups to convert sound signals into dynamic touch-sensory feedback."

The Kraken V3 HyperSense is the new flagship haptic headset of Razer. It packs Razer TriForce Titanium 50mm Drivers, THX Spatial Audio, a detachable HyperClear cardioid mic, hybrid fabric and leatherette memory foam cushions. This gaming headset costs around $130. The most affordable device from the Kraken lineup is the V3 which costs $99.99. It lacks haptics but has the same sound performance and design as its siblings.

Check out the Razer Kraken Pro V2 Analog Gaming Headset with Retractable Microphone for PC, Xbox One, and Playstation 4.

Post Views: 163
We hope you love our reviews! For your information, we do earn money from commission in the link in the content! For more information click here!
Tags: Kraken V3Kraken V3 HypersenseKraken V3 LineupKraken V3 ProKraken V3 X
ShareTweetShare