On the heels of the Apple event, Google is approaching its Google Pixel event scheduled for tomorrow. Many users are waiting to upgrade their existing Pixel phones and others are trying to get their hands on the brand new Google Pixel 6 or the Google Pixel 6 Pro model. The Google Pixel Event will be held on October 19, 2021, at 1 pm ET (10 am PT). The Pixel Fall Launch will be streamed on Google’s own YouTube platform. 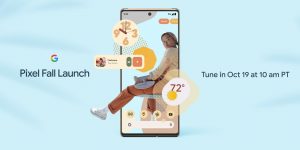 There have been multiple leaks in the past that have given away several specs of the upcoming phones. According to the leaks, Google Pixel 6 and Pixel 6 Pro batteries will have 4614mAh and 5003mAh capacities respectively. The most noteworthy upgrade is the 23W fast wireless charging speed.

You can also check out the Google Pixel 4, 64 GB Smartphone.

The other products that will be launched during the event remain unclear. Even though rumors on the internet suggest that the tech giant might release the foldable Pixel device.

A recent blog post from Google has revealed that the tech giant has signed a multi-year partnership with NBA for the promotion of their new gadgets. According to the Pixel creator, "Google Pixel is the Official Fan Phone of the NBA, NBA G League, and NBA 2K League. Google is each league’s Official Search Engine and Search Trends and Fan Insights Partner. Additionally, Pixel will be the first-ever presenting partner of the NBA Playoffs, joining YouTube TV, NBA Finals presenting sponsor, in the postseason. We'll combine the best of Google’s Search trends, information, technology, devices, and services to help fans go deeper and get closer to the culture, teams, and players they love."

What We Know About Google Pixel Until Now

All About the Google Pixel 6 Launch Event