Samsung’s foldable smartphones are very popular in the market. Many tried their hand at the Galaxy Flip when it debuted. Apart from the good looks, it is an extremely convenient phone that can fit into any tight jeans pocket. In fact, when the tech giant launched Samsung Galaxy Flip 3 people went into a buying frenzy. Samsung made a killing with its foldable gadget shipping 4.6 million units in 2021 and now it's working to attract more pockets with Samsung Galaxy Flip 4.

For those who like the concept of the Samsung Flip, another upgraded model will soon be here.  Even though the Samsung Galaxy Flip 4 release date isn't announced yet, many speculations suggest that it will be launched this August/September this year during Samsung’s launch event.  Rumors state that the event will be held on August 10.

According to leaks, the new foldable phone will look similar to its older sibling the Flip 3. It could use a 6.7-inch foldable display, with an improved hinge to give the phone a narrower gap when closed. Experts are predicting the phone to measure at 165.1 x 71.9 x 7.2mm when unfolded. Reportedly, it might accompany a larger 3,700mAh battery, which could explain the thicker build. 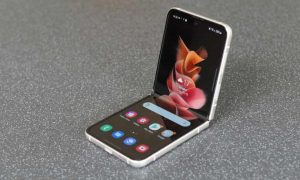 As mentioned before, the 3,700mAh battery will boost the battery capacity of the model compared to its predecessor. Some reports also suggest that the phone will be equipped with 25W fast charging. The Flip 3 was critiqued for its middling battery life and slow charging pace. According to leaks, the smartphone will be fitted with a 12MP main camera, a 12MP ultra-wide lens, and a 10 MP selfie camera.

In a world where smartphone makers are constantly fighting to upgrade the storage capacities of their devices, Samsung seems to be winning the race. If rumors are right, the Flip 4 will supposedly feature a 512GB storage configuration. This is a massive storage space for a tiny phone like Flip 4.

The Flip 3 released last year was priced at $999 and with the upgrades for Flip 4, it is likely that the latter might cost a bit more. There is also chip shortage and the Russia-Ukraine crisis to take into account. The company might also increase the price considering that it managed to achieve remarkable sales figures with its third-generation foldables. The Fold 3 and Flip 3 raked in total sales of 7 million units in 2022 alone. The tech giant will definitely be expecting a boost in sales and profit with its fourth-generation foldables.